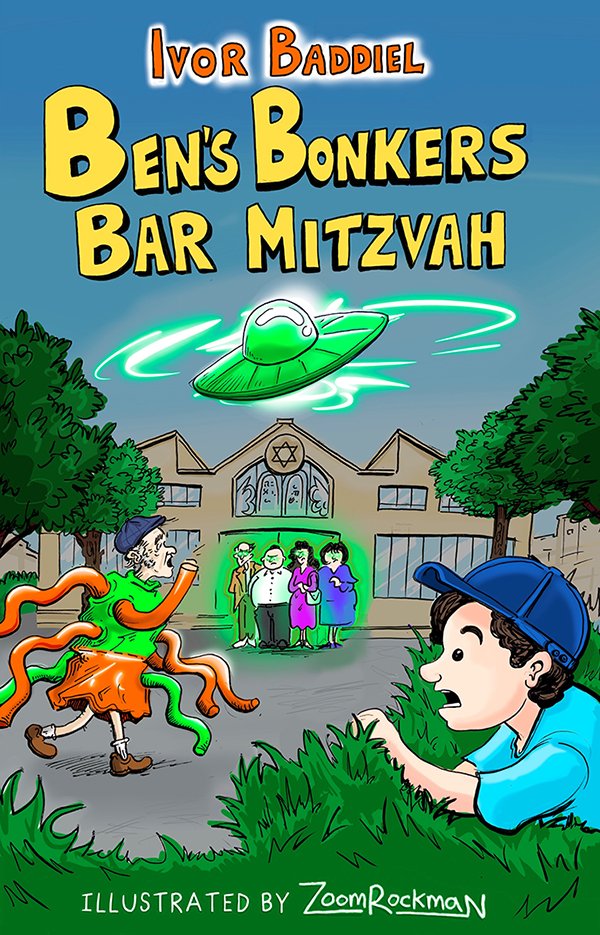 Ben Jacobs has made a list of everything that could possibly go wrong at his bar mitzvah, but even he didn’t foresee that the shul might disappear just days before the celebration.

The trouble is, no one believes him, apart from Grandpa. The rest of his family just carry on as normal… except now they are behaving rather oddly. And there’s a strange light in the woods behind the house, and some huge glowing egg-shaped objects appear at night. Is it just Ben’s over-active imagination, as Mum and Dad say, or is something more sinister taking place?

Ben turns to Grandpa for help, and together the two of them hatch a plan to save the world – and Ben’s bar mitzvah.

This zany and fun story of family, adventure and imagination is also about gaining confidence and growing up. Ben learns courage and builds belief in himself as a member of his family and the wider community.

Ivor Baddiel is a scriptwriter and author. His television and radio credits include the BAFTAs, the Brits, the National Television Awards, Soccer Aid, Mock The Week, The X Factor, The Voice, Off Their Rockers, Dancing On Ice, I’m A Celebrity Get Me Out Of Here, Loose Ends, Fighting Talk, Dead Ringers and Hot Gossip.

Ivor is also the author of twenty-three books for both children and adults.