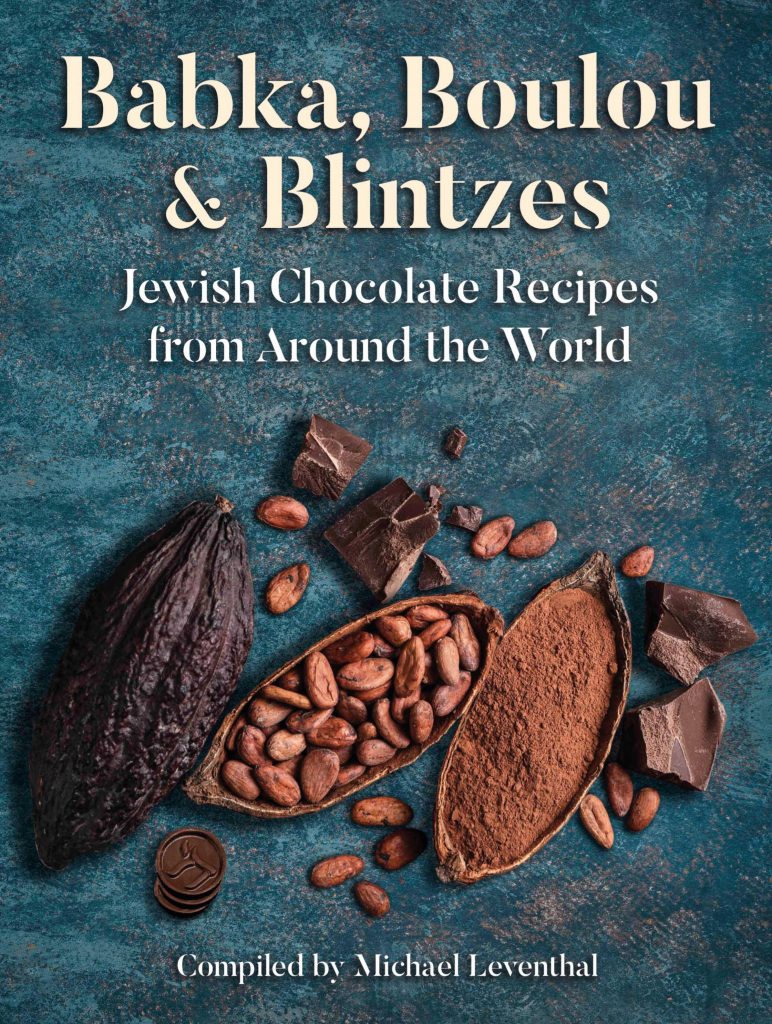 Take a peek inside

“The best book about chocolate I have ever read – terrific recipes, gorgeous photography and a unique cultural perspective. As with all the best Jewish cookbooks, you want to dive in and eat till you feel sick. Then eat some more.” – Giles Coren

‘Beautifully presented and the recipes look marvellous. I can’t wait to try them!’ – Joanne Harris, author of Chocolat

I urge you to grab a copy, for the chocolate, for the charity. Go Go Go.’ – Sarit Packer and Itamar Srulovich, Honey & Co

Discover the history of chocolate in Jewish food and culture with this unique recipe book, bringing together individual recipes from more than fifty noted Jewish bakers. This is the perfect book for chocoholics, anyone keen to grow their repertoire of chocolate-based recipes, or those with an interest in the diverse ways that chocolate is used around the world.

Each recipe helps provide an insight into the important role chocolate has played in Jewish communities across the centuries, from Jewish immigrants and refugees taking chocolate from Spain to France in the 1600s, to contemporary Jewish bakers crossing continents to discover, adapt and share new chocolate recipes for today’s generation. Babka, Boulou & Blintzes is a unique collection published in conjunction with the British Jewish charity Chai Cancer Care.

Previously he founded Gefiltefest, a Jewish food charity which organised Europe’s biggest Jewish food festival. He is co-author of Jews in Britain and edited The Hand of History (illustrated by Chris Riddell). He eats a lot of chocolate. You can see more of his work at www.michaelleventhal.co.uk

Before you take your next bite of some delicious chocolate, you may want to check out a new book by British autor Michael Leventhal

Before you take your next bite of some delicious chocolate, you may want to check out a new book by British autor Michael Leventhal, that explores the history  of chocolate in Jewish food and culture. In his book, the author of  “The Chocolate King,” which won a PJ Library Author Incentive Award, creates a unique recipe book, bringing together individual recipes from more than fifty noted Jewish bakers….  If you’re a chocoholic, or know one, this book of chocolate-based recipes, or those with an interest in the diverse ways that chocolate is used around the world, this book is for you.’ – Jordan Palmer, STL Jewish Light

This is definitely one of the best books for chocoholics everywhere.

This is definitely one of the best books for chocoholics everywhere. Anyone who is lucky enough to own it will use it often. The mouthwatering photographs will tempt even the most dedicated dieter.’ NetGalley

What a terrible book to read if you're on a diet or crave chocolate!

What a terrible book to read if you’re on a diet or crave chocolate! It begins with the earliest involvement in the development of edible chocolate, moves on to Jewish involvement in chocolate usage/chocolate trade, and then begins a beautiful but dangerous (to me, a chocolate addict) illustrated book of recipes. The photography is excellent and the recipes astounding. Best of all, the proceeds are being donated to Chai Cancer Care.’ – NetGalley

‘Michael Leventhal tells the story of Jews’ involvement with chocolate and he sweetens the tale with 53 recipes, new and old. Esteemed food writer Joan Nathan contributed a 400-year-old recipe for chocolate almond cake that was passed down orally in a Jewish family from Bayonne, France, where Spanish Jews settled in the 16th century. The recipes span sweet dishes like chocolate and Nutella blintzes, as well as savory foods as well like noodles with cocoa. It’s truly a Jewish chocolate lover’s dream.’  Rachel Ringler, The Nosher

‘Rich, fra­grant, entic­ing, heav­en­ly choco­late — it’s almost too good to be true! Michael Lev­en­thal presents a recipe book filled with spectac­u­lar gourmet offer­ings, lush pho­tographs in col­or, and fas­ci­nat­ing bits of Jew­ish his­to­ry that tell the sto­ry of choco­late as it relates to Jew­ish cul­ture and his­to­ry all around the world. It’s almost too good to be true, but it is tempt­ing­ly, sen­su­ous­ly, sat­is­fy­ing­ly real.

The book’s col­or­ful­ly illus­trat­ed intro­duc­tion delves into the his­to­ry of choco­late and choco­late-mak­ing, with a par­tic­u­lar empha­sis on Jew­ish com­mu­ni­ties and their many, many con­nec­tions to choco­late lore. For exam­ple, the Span­ish con­quis­ta­dors learned about chocolate from the Aztecs and, when they car­ried the knowl­edge home, Jew­ish traders in Spain, barred by anti­semitism from many oth­er trades, devel­oped an enthu­si­as­tic mar­ket for the spec­tac­u­lar new treat. The French learned choco­late craft from the Jews and then banned them from pro­duc­ing it. In Bel­gium, a Jew­ish immi­grant was grant­ed the first license to man­u­fac­ture choco­late. The Caribbean was a Jew­ish choco­late-mak­ing cen­ter as ear­ly as the 1600s. Choco­late Chanukah gelt, which seems so tra­di­tion­al, was devel­oped in the Unit­ed States in the 1920s. Choco­late’s deli­cious his­to­ry flows onward into mod­ern times.

The sweet cen­ter of the book fol­lows this engross­ing his­to­ry: the recipes them­selves. Each con­tains a brief intro­duc­tion, often includ­ing the coun­try in which the recipe orig­i­nat­ed. The recipes are clear, con­cise, easy to fol­low, and are accom­pa­nied by scrump­tious photographs of the fin­ished prod­ucts. Clas­sic choco­late rugelach, three dif­fer­ent bet­ter-than-basic recipes for brown­ies, unusu­al offer­ings such as Choco­late Beet­root Cake, exot­ic recipes such as Tunisian Choco­late Tart with Mahlab, veg­an choco­late chip cook­ies, Israeli White Choco­late Cheese­cake, and so many more. There seems to be no end to the fab­u­lous creativity.

The only thing that could pos­si­bly make this book any bet­ter is know­ing that all the pro­ceeds are being donat­ed to a char­i­ta­ble orga­ni­za­tion, in this case, Chai Can­cer Care of Lon­don. Deli­cious choco­late, fas­ci­nat­ing his­to­ry, and tzedakah, too? Who could ask for more?

The book is pub­lished in the UK, so a glos­sary of UK-US terms is includ­ed to avoid con­fu­sion and to be sure that as many peo­ple as pos­si­ble are wel­comed into this world of choco­late delight. A short biog­ra­phy of each recipe’s con­trib­u­tor is includ­ed as well.

For the Epi­cure­ans among us, those for whom choco­late is prac­ti­cal­ly a reli­gion, this book is for you. It’s a valu­able addi­tion to the cook­book shelf for every­one else, too.’  – Michal Hoschan­der Malen, Jew­ish Book Coun­cil

A pithy, eye-opening survey of the long involvement of Jews in the chocolate trade

This collection of chocolate recipes gathered from Jewish cooks around the world begins with a pithy, eye-opening survey of the long involvement of Jews in the chocolate tradebefore plunging into the heart of the matter: chocolate recipes.

Michael Leventhal, the publisher of a line of Jewish children’s books, draws on the talents of famous cooks and bakers such as Joan Nathan, Claudia Roden, David Lebovitz, Michael Solomonov, and Adeena Sussman for sweet and savory recipes.

Some are firmly rooted in local traditions, such as the titular boulou, a Jewish-Tunisian treat served to break the Yom Kippur fast. Panlevi, crisp sponge cookies, are traditional among Curaçao Sephardim.

Attractively presented and studded with bits of history and culture.

‘I cannot encourage people enough to go out and buy this book.’ – The Jerusalem Post

There’s never a wrong time to focus exclusively on chocolate.

‘There’s never a wrong time to focus exclusively on chocolate. In Babka, Boulou & Blintzes: Jewish Chocolate Recipes from Around the World, author Michael Leventhal explores the history of chocolate in Jewish food and culture. Featuring recipes from more than fifty accomplished Jewish bakers (like chocolate and cream cheese blintzes!) this will be your go-to cookbook if you’re a chocoholic or simply have an interest in knowing how chocolate is used throughout the Jewish diaspora.’ – The Nosher