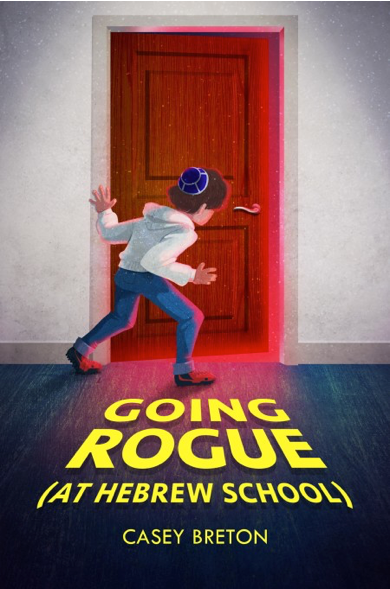 Ten-year-old Avery Green loves science. He loves football. He is crazy about Star Wars. But Hebrew school? No, thank you. Avery would rather have his arms sliced off with a lightsaber than sit through one more day of Hebrew School. He’s only asked about a million times why he has to go, but no one in his family has managed to convince him.

And then one day, Rabbi Bob shows up. He is strange, but how strange? And strange how?

Piecing together some unusual clues, Avery begins to suspect that this new rabbi might be a Jedi master.

Armed with something more powerful than a lightsaber, he sets out to reveal the surprising truth.

Going Rogue (at Hebrew School) is a hilarious tale about the deep passions of a 10-year old boy, Judaism, family, big questions and the surprising journey one can have in pursuit of truth and understanding. A book for any child who questions the purpose of religious school and any parent who has run out of answers.

Casey Breton is a former teacher and a recipient of the PJ Our Way Author Incentive Award. As a parent of three children, she has extensive experience answering the question, “Why do we have to go to Hebrew school?” She hopes this helps.

Readers don't need to be Jewish to enjoy this relatable tale of being forced into cultural and/or religious activities by one's family.

Gr 4–6 – “Ten-year-old Avery Green loves three things in life: football, science, and Star Wars. One thing he does not love? Going to Hebrew school twice a week. His parents assure him that it’s only until his bar mitzvah, but that’s three whole years away. In the meantime, Hebrew school seems to be actively preventing him from enjoying his interests. His classes are held at the same time as the practices for the East Bay Football League. His Hebrew school teacher changes the subject when he brings up the Big Bang. And his Hebrew school lessons have nothing to do with Star Wars—or that’s what he thinks, until Rabbi Bob, an interim Rabbi at the temple, becomes his new teacher. Rabbi Bob draws connections between Hebrew scriptures and ‘The Force,’ and has a lightsaber in his office. All of a sudden, lines drawn between Avery’s worlds begin to blur. When Damon, the football team’s resident bully, starts picking on his classmate Gideon, Avery must decide if the friendship is worth defending. The book’s length and fast pace make it easy for reluctant readers to enjoy. Avery is easy to empathize with, allowing the reader to see through his bravado and relate to his insecurities. A very helpful Notes section is included to explain Hebrew and Yiddish phrases and texts. VERDICT Readers don’t need to be Jewish to enjoy this relatable tale of being forced into cultural and/or religious activities by one’s family.” – Jessica Ko, Los Angeles P.L.

“It’s Hebrew school vs. Star Wars, football, and science. Ten-year-old Avery, who narrates his story, has three passions in life: Star Wars, science, and football. Unfortunately, he must attend Hebrew school, which interferes with playing football. He hates studying Torah because what he reads doesn’t always align with scientific evidence. Then the times for football practice change and he can join a team—a participation achieved by winning over his concussion-fearful parents. Hebrew school takes on a different dimension when a new rabbi arrives who amazingly like Yoda talks. He also plays music from the movies and owns a red lightsaber. Rabbi Bob even seemingly equates the Shema prayer with the Force. But Avery still grapples with what it means to be Jewish. Then, injuries on the football field, one to a bully and one to a friend, lead to a discussion of a mitzvah called bikkur cholim, which refers to visiting those who are sick. Avery now considers the possibility that religion and science can coexist, as the rabbi explains that Judaism values the process of questioning more than the certainty of answers. Still, Avery questions his attendance at Hebrew school, an obligation his parents never fully explain or discuss with him. Readers may be drawn to the detailed football plays and the Star Wars references while those in Hebrew school may find a kindred spirit. Best appreciated by reluctant Hebrew school attendees.” – Kirkus