In the Market of Zakrobat 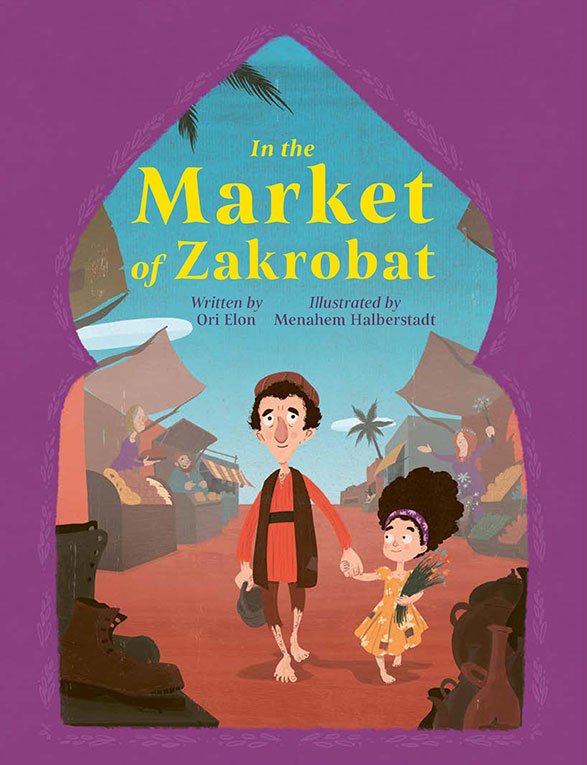 Baltosar lives in a giant fortress in the town of Zakrobat. Despite the thirteen boxes of gold coins locked away in his house, he prides himself on how frugally he lives.

Yosef, Baltosar’s neighbour, is a hardworking cobbler who lives in poverty. Yet every Friday he goes to the market to buy something special for Shabbat and he is famous for his festive Shabbat meals.

One night, Baltosar dreams that his boxes of gold grow feet and run away to Yosef. He wakes up screaming in terror and vows that Yosef will never have a penny of his great fortune. He comes up with the perfect scheme to keep his riches safe, or at least safe from Yosef, but things don’t quite go according to plan.

Told with humour and a lightness of touch, this classic fable of a miser’s comeuppance celebrates generosity of spirit and the joy of Shabbat as all the riches a person needs.

Ori Elon is an award-winning Israeli filmmaker and writer. He is the author of Invisible Show, which won the Israeli Ministry of Culture Best Novel award. He has written several children’s books including The Chickens that were Turned into Goats and King Gogle. He is the co-creator and writer of the critically acclaimed television drama Shtisel which won 17 Israeli Academy Awards. He was one of the writers of the drama series Srugim, the miniseries Autonomous and the comedy The Choir.

Menahem Halberstadt studied painting and drawing under the instruction of the famous Israeli artists Leonid Balaklav and Aram Gershuni. Following this, he studied animation at the Betzalel Academy and graphic design at Hadassah Academic College, Jerusalem. He works as an illustrator with a number of publishing houses in Israel and lives in Israel with his wife and four children.

‘The Tal­mu­dic sto­ry about Yosef, a poor man whose unerr­ing love for the obser­vance of Shab­bat grants his life dig­ni­ty and pur­pose, has been recre­at­ed for young chil­dren by Ori Elon and Mena­hem Hal­ber­stadt in their book In the Mar­ket of Zakro­bat. With tex­tu­al atten­tion to the details that con­vey mean­ing in a sim­ple way, and with del­i­cate­ly beau­ti­ful pic­tures, both author and illus­tra­tor con­vince their read­ers of an impor­tant truth; hold­ing on to mate­r­i­al pos­ses­sion brings their own­er noth­ing, while shar­ing enrich­es both the gen­er­ous per­son and those who ben­e­fit from his or her kind­ness. Its ancient set­ting and fairy tale qual­i­ty pair with a clear sense of rel­e­vance today, as two very dif­fer­ent char­ac­ters con­trast to make a gen­tle point about lead­ing a mean­ing­ful life….   Halberstadt’s char­ac­ters are com­ic and dig­ni­fied at the same time. The car­toon-like sim­plic­i­ty and exag­ger­a­tion of their faces make them rec­og­niz­able types; the wealthy miser [Bal­tosar] radi­ates resent­ment, but the man of faith is able to appre­ci­ate what he has. When Yosef finds a giant gem inside his care­ful­ly cho­sen Shab­bat fish, two pic­tures define his per­son­al­i­ty. In the first, he rais­es one eye­brow in aston­ish­ment, then he embraces his young daugh­ter. At the meal where he has invit­ed every­one to enjoy his good for­tune, he rais­es his arms in their frayed sleeves and clos­es his eyes, trans­port­ed to a lev­el of hap­pi­ness that Bal­tosar will nev­er know. Elon and Halberstadt’s inter­pre­ta­tion of Yosef’s sto­ry is as sweet and reward­ing as Yosef’s Shab­bat celebration.’ – Jewish Book Council