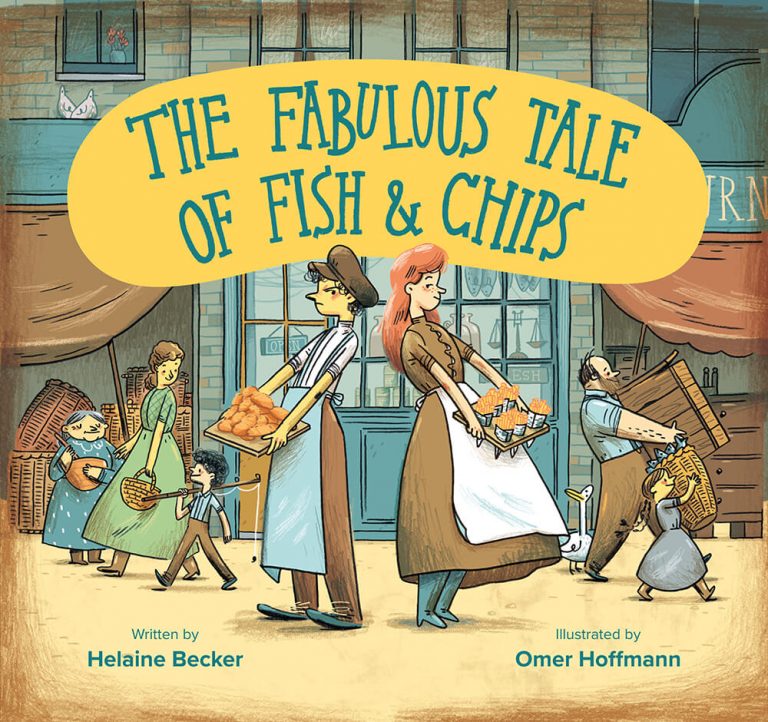 Watch the author and take a peek inside

Joseph Malin loves his grandmother’s fried fish, which she makes to an old family recipe.

It’s so good, he thinks he might be able to make some money from it; money that his immigrant Jewish family desperately needs. He takes it into the marketplace of 19th Century London’s East End and calls out to passers-by: ‘Fresh from the ships/Hot n’ tasty fried fish’. Before long, people are coming from far and wide to try the delicious snack.

But his success inspires a rival. Annette, the greengrocer across the street, sees an opportunity to hawk her own family favourite: Belgian-style fried potatoes. Piping hot chips!”/So crisp, so delish, she calls. And they’re a hit too.

The competition between Joseph and Annette heats up as they each try to outsell each other at the market. And then one day…Crash! The two collide. Chips slip. Fish flies. It’s a disaster. Or—perhaps not…

This is the playful fictional account of how the real-life Joseph Malin, a poor Jewish immigrant invented fish and chips, the iconic British menu item.

Helaine Becker is the bestselling author of more than 90 books for children and young adults, including the No. 1 Canadian national bestseller A Porcupine in a Pine Tree (Scholastic Canada) and the international bestseller Counting on Katherine: How Katherine Johnson Saved Apollo 13 (Henry Holt). Her books have won multiple awards and been translated into ten languages. A New York native, Helaine has lived in Toronto, Canada for more than 20 years. She has also written Gottika for Green Bean Books.

He lives in Givatayim with his wife and their two children. He also illustrated The Sages of Chelm and the Moon, published by Green Bean Books.

‘Joseph Malin loves catching and eating fish – but selling it is hard, until he thinks of marketing it ready-friend. Then, it sells like hot fish – exciting customers so much that they story buying veg from the vendor next door. So she reinvents her potatoes… The Fabulous Tale of Fish & Chips by Helaine Becker begins with the real history of Joseph Malin’s business success – then serves up the chips. Omer Hoffmann’s wonderfully detailed drawings – and Becker’s family fried-fish recipe complete the delicious package’.  – Angela Kiverstein, The Jewish Chronicle

‘Kids will love Becker’s sprightly text and appreciate Joseph’s and Annette’s enterprising spirits…. Omer Hoffmann joyously brings this fun and fabulous tale to vivid life with his detailed, emotive, high energy illustrations. He effectively depicts the hustle and bustle of 19th century London dock culture; you can almost hear the vendors hawking their goods and haggling with customers in the marketplace, the sheep bleating, the chickens squawking. His visual narrative infuses the story with good helpings of verve and humor.’ – www.jamarattigan.com

The inter­ac­tion of words and pic­tures in this book is as har­mo­nious as Joseph and Annette’s team­work.
‘You may think of fish and chips as a quin­tes­sen­tial­ly British meal, with an ori­gin almost as remote as Stone­henge. In fact, this com­bi­na­tion dish was actu­al­ly intro­duced to Eng­land in the nine­teenth cen­tu­ry by a Sephardic immi­grant named Joseph Malin. In The Fab­u­lous Tale of Fish & Chips, Helaine Beck­er and Omer Hoff­mann tell his sto­ry as a clas­sic exam­ple of per­sis­tence and imag­i­na­tion, as well as a reminder of the con­tri­bu­tions of immi­grants to their adopt­ed homes. Becker’s text is atten­tive to the details that will appeal to young read­ers, and Hoffmann’s gen­tly com­ic and his­tor­i­cal­ly accu­rate images give the book a delight­ful flavor.

‘Joseph works in his family’s shop. For­tu­nate­ly, both for his cus­tomers and for today’s read­ers, he loves every­thing about fish, from buy­ing it fresh in the mar­ket, to prepar­ing it accord­ing to his grandmother’s recipe. Hoffmann’s draw­ing in sequence of the fam­i­ly matri­arch cut­ting, coat­ing, and fry­ing the fish con­veys the Malins’ ded­i­ca­tion to their craft. Yet chil­dren will under­stand the dif­fer­ence between a person’s voca­tion and his abil­i­ty to earn a liv­ing through it when Beck­er informs them that ​“Eat­ing fish was one thing. That was easy. But sell­ing it was hard.” Final­ly, in the midst of their household’s fre­net­ic activ­i­ty, Joseph con­ceives of an idea. Gold­en lines rep­re­sent the aro­ma of fried fish sur­round­ing him, while tiny dark spots of men­tal activ­i­ty arise from his curly black hair. Their fam­i­ly will sell, not only fresh fish, but cooked plates of the new delicacy.

‘Con­flict appears in the sto­ry when anoth­er young entre­pre­neur, Annette, resents his suc­cess, and decides that her grandmother’s recipe for fried pota­toes has the same poten­tial to attract cus­tomers. Annette has beau­ti­ful red hair and a look of deter­mi­na­tion on her face. When the two rivals lit­er­al­ly crash into one anoth­er in the mar­ket, Hoff­mann turns the car­toon-like event of near-dis­as­ter into a for­tu­nate acci­dent. There is an under­tone of eth­nic com­pe­ti­tion, along with a ques­tion­ing of gen­der roles. In her author’s note, Beck­er explains that French and Bel­gian women may have brought fried pota­toes to London’s East End as ear­ly as the sev­en­teenth cen­tu­ry. The same neigh­bor­hood even­tu­al­ly became a Jew­ish enclave. Cer­tain­ly, the mes­sage of peace­ful coex­is­tence is part of Joseph and Annette’s deci­sion to work togeth­er as they hawk their wares loud­ly, and ​“in per­fect harmony.”

‘The inter­ac­tion of words and pic­tures in this book is as har­mo­nious as Joseph and Annette’s team­work. Brief nar­ra­tion, glimpses into each character’s thoughts, and poet­ic phras­es advance the plot. The book’s design takes full advan­tage of both col­or and blank space between images and texts, almost giv­ing the sense of a graph­ic nov­el. Annette stands with one hand on her hip, the oth­er casu­al­ly toss­ing a pota­to in the air, as she imag­ines pos­si­bil­i­ties: ​“If Joseph can sell fried fish, why can’t I sell fried pota­toes?” Soon she is hard at work, stir­ring a pot with so much ener­gy that some of the pota­toes fly into the air. Final­ly, she walks off the page with her tray of goods, fol­lowed by a goose who has trou­ble keep­ing up with her. Hoff­mann uses humor to appeal to his read­ers, but always in an under­stat­ed way.