The Lost Spy and the Green Dress 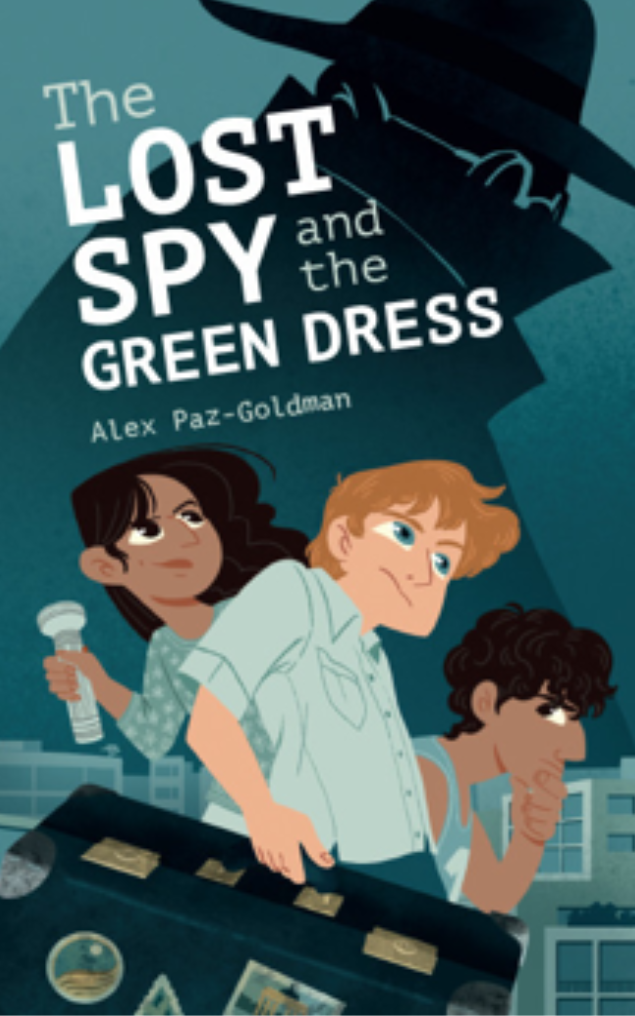 For twelve year-old Motti, growing up in Israel in the 1960s, the world is full of mysteries to be solved, while his town is full of spies to be caught. His parents are Holocaust survivors, struggling to build a new life for themselves but, to Israeli-born Motti, they are nothing but an embarrassment. Unlike them, he will not be a victim; he will be bold and strong and fearless.

So, when Motti and his best friend Reuven identify a suspicious, elderly man in the neighbourhood as a potential German spy, they set out to unmask him, determined to root out the enemy and defeat him. Thus ensues a series of adventures, investigations, near misses and the repeated appearance of a green dress.

Aided by Reuven’s sister Aviva, they finally solve the case and, in the process, Motti uncovers some secrets closer to home, secrets like: what does his mother hide away in her private drawer? Why did she have to go on a trip to Germany? And what exactly is she refusing to say about her past?

An homage to classic children’s mystery books such as Enid Blyton’s Secret Seven, this is a tightly-plotted, funny, and complex story which explores heavy themes – the Holocaust, trauma, mental health and poverty – with nuance, a lightness of touch and a cast of compelling young characters.

Alex Paz-Goldman was born in Israel in 1955 to Holocaust survivor parents. He has a BSc in Computer Science from the Israel Institute of Technology, and an MA in Child and Youth Culture from Tel Aviv University. His short stories have appeared in publications including Einayim, the most popular children’s magazine in Israel and his first book, Adventures in a Small Town (with Iris Argaman) has been adapted for the stage. The Lost Spy and the Green Dress is his second book and, like the first, is recommended by the Israel Ministry of Education. In 2017, Paz-Goldman was awarded the Devorah Omer Prize for Youth Literature. He lives in Tel Aviv.

Green Bean Books’ forthcoming mystery story The Lost Spy and the Green Dress is set in Israel in the 1960s—a time when Israeli author Alex Paz-Goldman, born in 1955 to Holocaust-survivor parents, would have been around the same age as his 12-year-old protagonist. The novel touches on difficult topics such as the Holocaust, trauma, mental health, and poverty. Publisher Michael Leventhal says he’s seen “an increasing number of translations of Hebrew-language work from award-winning Israeli authors and illustrators,” noting that “new subjects and new areas of history that have never been tackled are finally being portrayed, too.”

‘The Lost Spy and the Green Dress by Alex Paz-Goldman demonstrates that profound and thought-provoking children’s literature that is also engrossing is sometimes produced here too … The writer uses a detective-story plot to tell a far deeper tale … Paz-Goldman doesn’t tell a regular story and his manner of telling, as well as his talent, are superior to the run of the mill in this genre … I particularly enjoyed the mesmerizing way in which the writer describes childhood in a Ramat Gan neighborhood in the middle of the 1960s, a description through which he manages to convey an entire era. There’s a lot of courage in Goldman’s narrative technique … Do not miss this book.’

Ronit Rokas, Achbar HaIr
The Lost Spy and the Green Dress undoubtedly meets the criteria for a work of art

‘The Lost Spy and the Green Dress undoubtedly meets the criteria for a work of art. A detective story that harnesses the dramatic effect of that genre and childhood joy in order to present additional layers, deeper and no less dramatic. The flow of the story, along with the lucid, convincing, humoristic and moving  portrayal of life in its complexities, make for the reading experience that is to be expected from a work that is so precise and enriching … The great success of Paz-Goldman lies in his ability to construct a story in a framework that is strong enough to contain sub-plots whose content is complex and difficult. Another reason is the delightful and convincing depiction of the way people lived in that era … The Lost Spy and the Green Dress is a decisive demonstration of the way that an entertaining, suspenseful adventure for young readers can also have many layers without being oppressive but rather can even make it soar, up to the peaks of fine writing.’

Completely charming, and a strong contender for the Sydney Taylor Book Award.
‘The world around Motti Friedman is full of intrigue. It is 1964, he is 12 years old, and he is absolutely certain there are spies living in his neighborhood outside of Ramat Gan. With his best friend Reuven, he will follow in the footsteps of the heroes of his favorite books – The Secret Seven, The Young Detectives, and Eight on the Track of One – and reveal at least one hidden spy. Trailing a suspect through the streets is much more exciting than doing his homework in the tiny, run-down apartment where his mother is forever at her sewing machine, and his father, unable to work since his recent stay in a convalescent home, sits reading the newspaper. Embarrassed by what he sees as the weaknesses of his parents, Holocaust survivors who rarely speak of the past, Motti wants to prove himself brave, strong, and clever, part of the generation that will shape Israel’s future.
Real life turns out to be less straightforward than his beloved mysteries, without clear lines between heroes and villains. Everyone has secrets, and it is easier than he ever thought to betray a trust.

Many of Motti’s struggles are familiar: trying to differentiate himself from his parents, accidentally hurting a friend while trying to help, and being confused by the beginnings of romantic attraction. These timeless adolescent concerns are placed in 1960s Israel, drawn with vibrant detail by Paz-Goldman, who was born in Israel to Holocaust-survivor parents himself. The heavy themes in the background, including poverty, mental illness, and grief, never overpower the youthful energy and spirit of adventure of the novel. It is a thoughtful, nuanced portrayal of a slice of modern Jewish history through the eyes of a young person right in the middle of it, and a thrilling mystery with nods to classic children’s literature.
Completely charming, and a strong contender for the Sydney Taylor Book Award.’ – Beth L. Gallego, The Sydney Taylor Schmooze