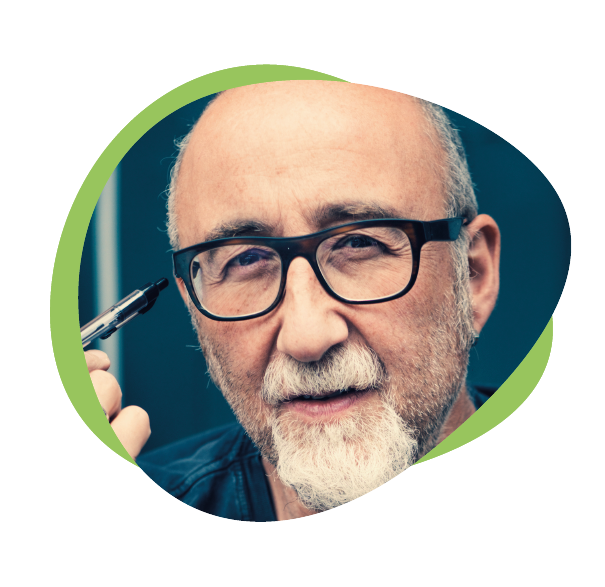 1. This is not your first book for children, but is it the first with Jewish content right at the forefront? If so, why did you decide to tackle such a Jewish subject?

I was in a meeting some years ago now and an editor was bemoaning the lack of books that were Jewish, or had Jewish content, that weren’t straightforwardly about festivals and the like. So then I just blurted out, ‘How about a book called Ben’s Bonkers Bar Mitzvah?’ She liked it and I developed it from there. It was a funny notion, but the book couldn’t just be a depiction of a crazy bar mitzvah, so the real task was to find the story, that’s when it became more Jewish I guess, addressing the notion of becoming a man and what that
means.

2. Was the main character of Ben inspired by anyone you know? Or is there part of you in Ben?

There is part of me in Ben, definitely. I don’t feel that grown-up myself, and I don’t want to. I have children now so I am, and I like to think I’m a responsible parent, but inside I still want to be a child, to have fun and be silly, to have no responsibilities, to be taken care of, and I feel that side of me very keenly, as does Ben, albeit at a much younger age. I think really it’s not so much about being a traditional grown-up, but about proving that – when need be – you can step up and be responsible and act like a grown-up, but the rest of the time, it’s fine to be silly, which – with any luck – is most of the time.

3. Are any of the other characters (excluding the aliens) partly based on people you know?

I think Grandpa is possibly an idealized version of the grandfathers I wished I’d had … no, that’s not fair, it’s an idealized version of the relationship I wish I’d had with my grandparents. Nowadays, I find myself wishing I’d talked to them more when I was younger, and got to know them better, so I think Ben and Grandpa’s relationship is based on that. Otherwise, I think Ben’s family, when not aliens, are sort of based on the families of friends of mine who were straighter and more normal than mine when I was growing up. My parents were anything but normal.

4. In a film version of the book, who would play the main characters?

The love child of Rachel Weisz and the Chief Rabbi.

5. Do you believe in life on other planets? Not necessarily aliens that take over shuls, but
alien life in any form?

I do, but it’s less of a belief and more statistical fact. There are billions and billions of planets and galaxies, so the chances that none of them has life on it is very low. I’d love aliens to show up, obviously it would be fascinating, but it might also be the only chance there is of unifying human life.

6. Of everything you’ve written, what are you most proud – or most embarrassed – to have done?

Embarrassed, many things – I once worked on a TV show called, Men For Sale, the less said about that the better. I’m very proud of Ben’s Bonkers Bar Mitzvah, but I also wrote a
picture book for younger children some years ago called Cock-A-Doodle-Quack-Quack. You might think it’s easier writing a short picture book, but because there are so few words, every one is precious and we really worked to get it right and as good as it could be. I love going into schools and reading it to reception classes, there’s something magical about it: in this day and age, with so much technology, seeing children rapt by a very simple story is great.

7. Can you offer any tips or words of wisdom for aspiring writers?

Yes. I think the main one seems blindingly obvious, but it has helped me over the years and still does. Essentially it is to tell yourself that no one is watching. When you start writing something it’s just you and your computer or notepad or parchment or whatever you write on, and sometimes that can feel scary or it can be hard to get going. If you actively tell
yourself that no one is watching, and that it doesn’t matter what you write because you can delete it or throw it away and no one else will ever see it, I have found that that helps me get going or get over a block … as I said, I still do it now. When I can’t think of something, I remind myself of that and then start writing any old rubbish, and it just unclogs my mind and I’m off again … and sometimes I do delete what I’ve written, but other times there is something pretty good in there that I keep and build on.

8. Which Jewish stories do you remember reading and enjoying as a child?

In Habonim we would often be told stories about the people of Chelm, which I always enjoyed because they were funny … I also love a story about a young child – I think it might have been the Baal Shem Tov – who went to shul but couldn’t read, so he recited the alphabet, or in another version it may be that he sang a song, but he did it with all his heart … It tells me that it doesn’t matter if you’re not the best or if you don’t know everything; if you try your best and do it with all your heart, then that is all that anyone can ask. I don’t go very often, but I’ve always found a lot of people in shul to be quite hypocritical in that respect: for them it’s more about what people are wearing or who knows what to do or all
the prayers. If there is a God, I think s/he wouldn’t be bothered what people looked like or what they said as long as they put their heart into it.

9. Do you have a dream writing or other project? Or anyone you would love to work with?

I’d love to write a TV or film comedy. I’ve had a couple of radio comedies that have been made, but if I could write something like The Office or Curb Your Enthusiasm or The Life of Brian … oy, would I be happy.

10. Where do you stand on the ‘Own Voices’ debate? For a Jewish story, do you think it’s important to have a Jewish author? Could Ben’s Bonkers Bar Mitzvah have been written as well by a non-Jewish author?

That’s a tricky one. I think it’s very restrictive to say only a Jewish author can write a book like that. Does that mean that a non-Jewish author can’t have a Jewish character in one of their books? My brother wrote a book based on our grandfather’s experience of being interned in the Isle of Man during the war … he of course hadn’t been there during the war, so he had to do a lot of research and recreate it in the story as best he could. I’ve just read The Island of Missing Trees by Elif Shafak. She is a Turkish Muslim, I believe, but one of the main characters is a Greek Christian. I don’t think the book suffered at all because of that. So, in short: yes, it could have been written by a non-Jewish author, but it helps to be Jewish.